Madagascar: Laughing with the Ladies 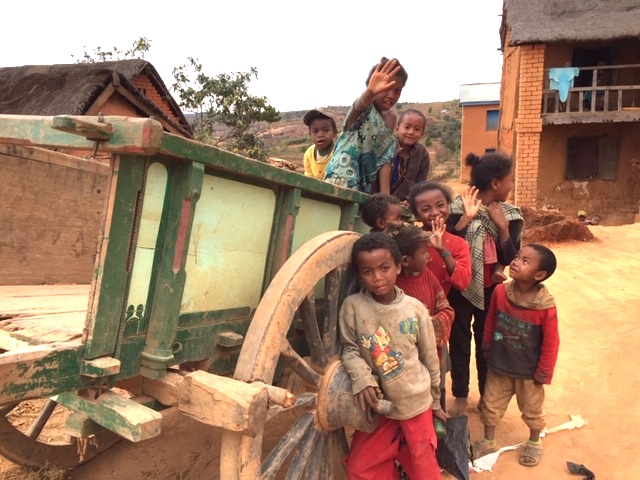 Aug 21, 2019 – Tonight I was stretched in ways I haven’t been in a long time. I’m spending the night in a village that has no electricity and no running water. There’s a candle by my bed and I don’t know whether it’s ok to let it burn to the bottom. Or will I set this wooden house afire? The trail to the bathroom – a stall that thankfully has a western-style sit-down toilet that I can’t figure out how to “flush” as there’s no water bucket nearby – is a trek down several steep, treacherous wooden steps, and, of course, there’s no light. Who knows what I ate my first night in Madagascar that gave me traveler’s diarrhoea, but I’m mortified by the thought that I might be sick tonight, so I’ve been popping my anti-diarrhoeal pills like candy.

And yet I feel strangely contented. The evening started with the women who own this gite throwing a party with local musicians. At first, I felt self-conscious trying to get the prescribed steps to the “rope” dances. But later everyone let loose and the ladies all danced in a circle with each one taking a turn in the middle. The musicians were all men, playing songs that felt like jigs. The women danced freely, almost seductively, with each other and laughed a lot. I couldn’t resist.

The kitchen is a small room with a plastic tablecloth covering the dirt floor. On the right is a single ledge that holds the dishes and buckets. To the back is a stack of wood – no fireplace, no pit, no ventilation. Three pots rest on top of the wood – one with boiled chicken, one with greens, the third with onions to brown when the greens are done. The room is big enough for the 9 of us to sit in a circle on the floor around the meal spread out in the middle. We eat by the light of the fire and a few candles. The sound of the rain on the hard ground outside adds to the intimacy. We say grace, pass the plates and laugh a lot.

I had to ask how to wash my hands. I was led down to the shower stall and cold water and dish soup were poured on my hands. I think I’ll wait til I get to my hotel tomorrow night to shower! Dinner – I was nervous about the food because I didn’t want to eat too much and irritate my intestines. I had a little rice with chicken broth and some really tasty green vegetables that were like collard greens. As I feared, everyone commented on how little I was eating. The food was really tasty, though, and I wished I could have had seconds. Boiled chicken, carrots in vinegar (which I passed on), cooked greens with onion, red rice – a special treat.

Dishes were washed in buckets of well-water and dish soap. I dried.

After dinner, we had a little chica-chica, as the Filipinos call a small chat. The elderly man thanked me for coming and hoped I would talk about the village to others. I thanked everyone and asked them if they had any questions for me. Did I have children? How old am I? The guesses ranged from 40 to 70 – that from the old man! I responded with exaggerated indignation. The women laughed. Who will take care of me in my old age? I was asked. Malagasy parents pick a child to live with when they need care. “He will, since he thinks I’m 70!” I pointed to the old man who turned out to be 63 but looked at least 15 years older. Everyone laughed. Humor really does transcend culture.

“Move here and we’ll take care of you,” the women said. And I believed them.

They asked what I do for a living. I talked about reporting from Iraq, but I’m not sure they understood. Did they know about the war? Arséne, my intrepid guide, translated between English and Malagasy.

We talked about how big America is, how it takes me 5 days of driving crazy like Arséne to cross America to visit my mother.

They asked about how rich America is and I talked about the huge gap between rich and poor – they understood that one! We compared notes on homelessness.

I asked them about their impressions of America. A country that wants to help others, the old man said. He commented that America has run out of space – everyone has to build up to make places to live. He must have seen photos of skyscrapers at some point. It was an interesting exercise for me; they have no reference points. Without electricity, they’ve never seen “Friends” or a “Rambo” movie. They don’t read books. I asked if they told stories. One by one, the women told their stories that always started with how many children they have. Two women’s husbands had left them with small children to raise by themselves.

I told my mother’s story about her being married 6 times and having 3 children, 2 of whom have died and they all looked sad. “But she has many husbands!” I said. Arséne explained divorce. They asked if my parents were still alive. The next morning, I asked Arséne if I had violated a taboo by talking about dead children. It seemed impossible to me that none of these woman – each of whom had 4 or 5 kids – had not experienced the death of a child. He assured me that I hadn’t. It wasn’t even 9:00, but time to break up the party, which meant I had to go to bed. I could hear the women laughing as they prepared their room (I think they slept on mats on the floor; I was in a single bed in my own room). Listening to them made me realize just how valuable community is and how lucky I was to have been part of theirs, even if only for a night. The village is called Andriambilany and my guide, Arséne, co-owns Tour Guide LoveMada (https://tour-guide-lovemada.mg) He and his brother donate a portion of their profits to help children from this village go to school. It costs $200/year to sponsor a child.

When you’ve traveled, where have you found community? I’d love to hear about it in COMMENTS below!

Kelly Hayes-Raitt admits she sleeps around. Usually with animals.

As a full-time housesitter and traveler for the past decade, she’s learned a thing or two about housesitting and shares her knowledge and experience in her popular book How to Become a Housesitter: Insider Tips from the HouseSit Diva available in soft cover or Kindle at Amazon or ebook on her HouseSitDiva website.

Before nomading, Kelly reported live from Iraq during the early weeks of the U.S.-led invasion. Her journalism has won several literary awards and has been widely published in anthologies.

Lately, she’s turned her energy toward helping other writers get their books jumpstarted. Her coaching clients call her “inspiring,” and students in her workshops rave about her unique teaching techniques. Learn more about working one-on-one with Kelly at JumpStartMyBook.org.

Or join her in Cape Town, South Africa, February 1 – 10, 2020, for a magical writing retreat to jumpstart your book! JumpStartMybook.org/writers-retreat/